Cuba is a country that is unparalleled in its natural beauty, with incredible beaches wrapping around the coast and lush forests covering the island that are home to a huge amount of tropical wildlife. Located in the mouth of the Gulf of Mexico, Cuba is a popular holiday destination all year round and offers a unique range of experiences for every traveller who visits.

October is a quiet month in Cuba, as the country’s wet season is coming to an end and the risk of rain puts a lot of people off. However, the weather in Cuba in October is still hot and sunny when the clouds have passed, and visiting the island in the off-season offers a different insight into the customs and cultures of this vibrant and diverse part of the world.

Reasons to visit Cuba in October 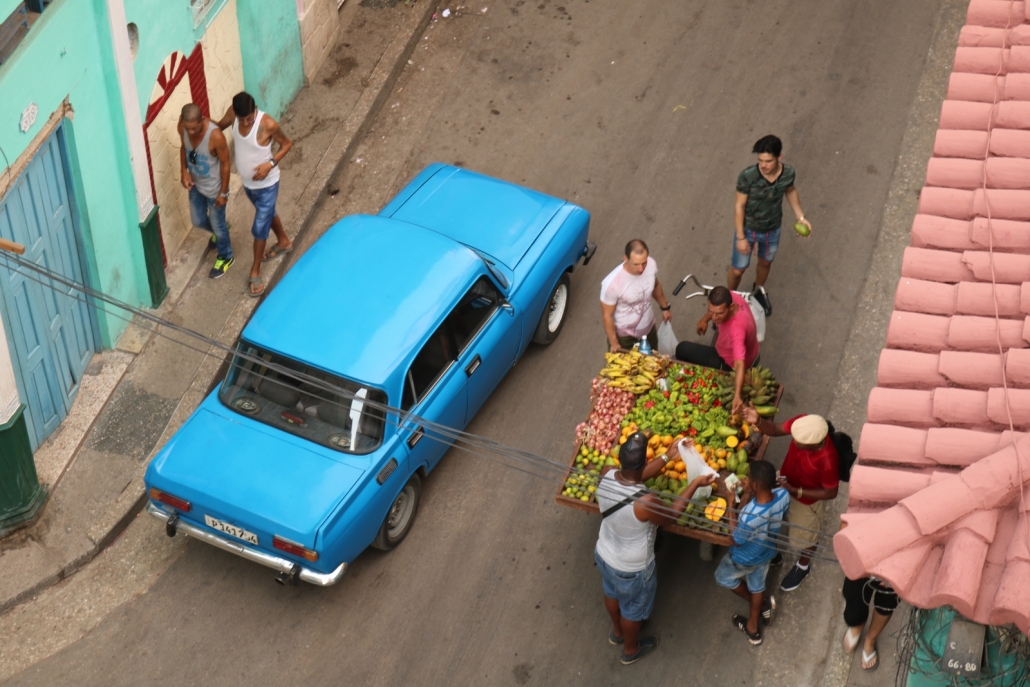 Weather in Cuba in October 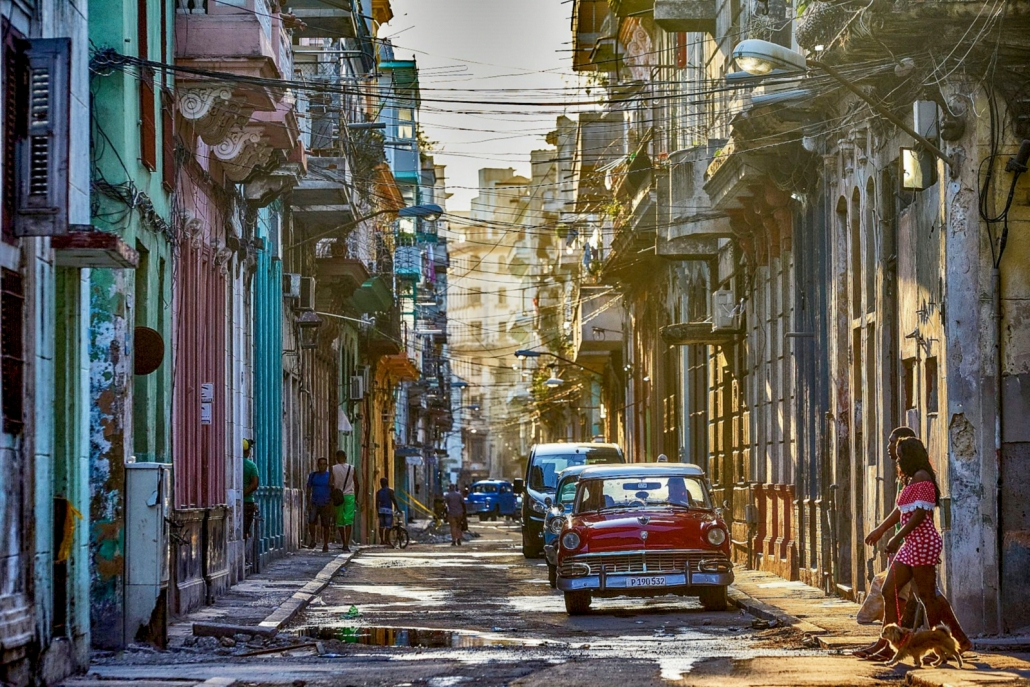 October is the last month of Cuba’s wet season, and the heat, humidity and rainfall of the last few months should start to dwindle as November approaches. Aside from the Pinar del Río province, almost everywhere on the island experiences heavy rainfall between bouts of sunshine, and whilst storms usually blow over quickly they can occasionally last for hours.

October is the last month of hurricane season in Cuba so the likelihood of a tropical storm hitting the island is low. There is still a small risk of dangerous weather conditions however and you should consider this before booking your trip.

Temperatures in Cuba in October can differ depending on where you are on the island, with the north generally being cooler because of the increased rain and the south feeling a lot hotter. The average high temperature in October in Cuba is 31°C, which can feel a lot warmer because of the high humidity.

The average low temperature in the country is around 23°C, although it may stay a few degrees warmer in southern areas of Cuba such as Trinidad. Make sure you pack light layers of clothing to feel comfortable in the heat and check whether your accommodation has air conditioning.

The average sea temperature in Cuba in October is around 29°C, which is a very pleasant temperature for swimming, snorkelling and scuba diving.

Cloud cover in Cuba in October decreases as the month progresses, with days becoming brighter and less overcast towards November. Chances of rain also decrease towards the end of the month, but there is still a reasonable chance of rain every day in October.

Typically, rain in Cuba tends to be sudden, heavy and short-lived, and is most likely to hit in the afternoons and have blown over by the evening.

There is an average of nine hours of sunshine each day in Cuba in October, and most days you can expect warm and sunny mornings before the afternoon rains arrive. The sun rises around 7.30 am and sets either just before or just after 7 pm as the days get shorter.

Where to go in Cuba in October 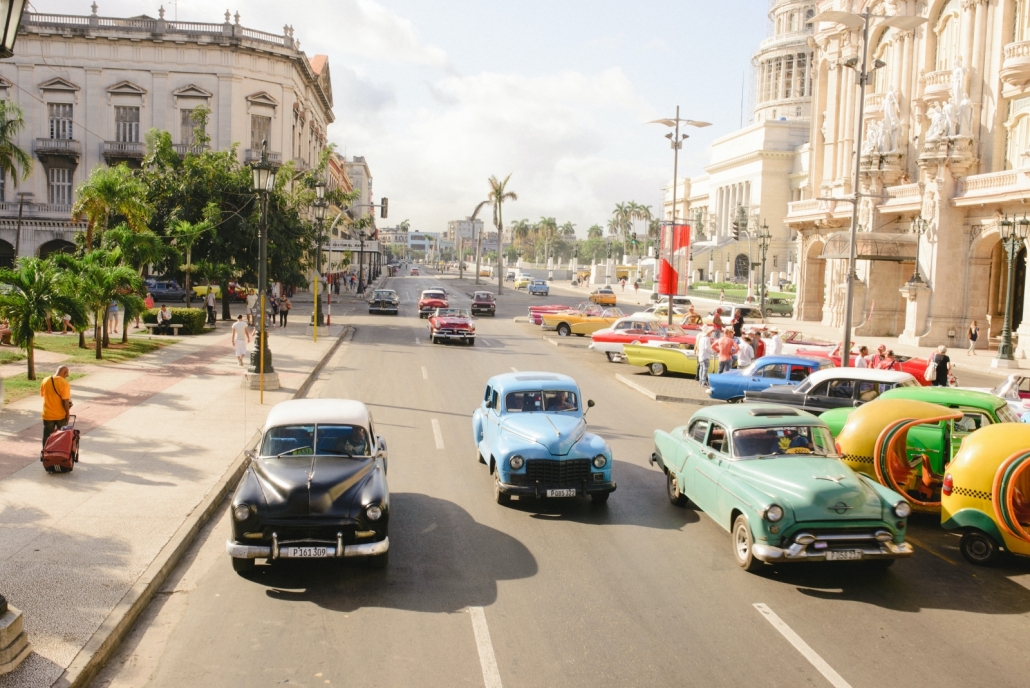 Cuba’s capital Havana is the country’s most popular city, and in October it will be empty of the usual hordes of tourists that descend during the peak holiday season. The streets are a total mismatch of styles and eras, with old colonial buildings perched on one corner and rows of independent cafes and modern boutiques to be found around the next.

If you’re after history then the borough of Old Havana at the very centre of the city is a must-see, with classic Cuban architecture everywhere and many museums and galleries in which you can discover more about the country’s culture. Havana is a good place to be based in October because of the large range of indoor venues that provide shelter from the rain, including shops, restaurants and bars.

Viñales is another part of Cuba that is usually very busy during tourist season, which makes October an excellent time to go and explore the town and surrounding valley. The area’s popularity has not led to a massive amount of tourism and you will mainly find simple bungalows, farms and tobacco fields amongst the beautiful greenery.

Viñales is a protected UNESCO World Heritage Site because of the uniquely beautiful landscape and preserved authentic settlements, and is a wonderful place to explore on mornings when the weather is good. The valley is famous for its dramatic flat-topped rocks formations known as mogotes, and for its incredibly fertile soil which is still farmed using oxen.

For something a bit different during your trip to Cuba, you can go really off the beaten track to the Pinar del Río area, famous for being the best place in the country for growing tobacco. Understandably, inhabitants are mainly farmers and rural workers who will be found beginning to plant the tobacco crops at the end of October.

The city of Pinar del Río is home to interesting attractions such as the Sandalio de Noda Natural Sciences Museum or the recently renovated José Jacinto Milanés Theatre. Art fans will also enjoy a visit to the Centro Provincial de Artes Plásticas Galería to see both the impressive murals on the outside of the building and the range of local art inside.

Things to do in Cuba in October 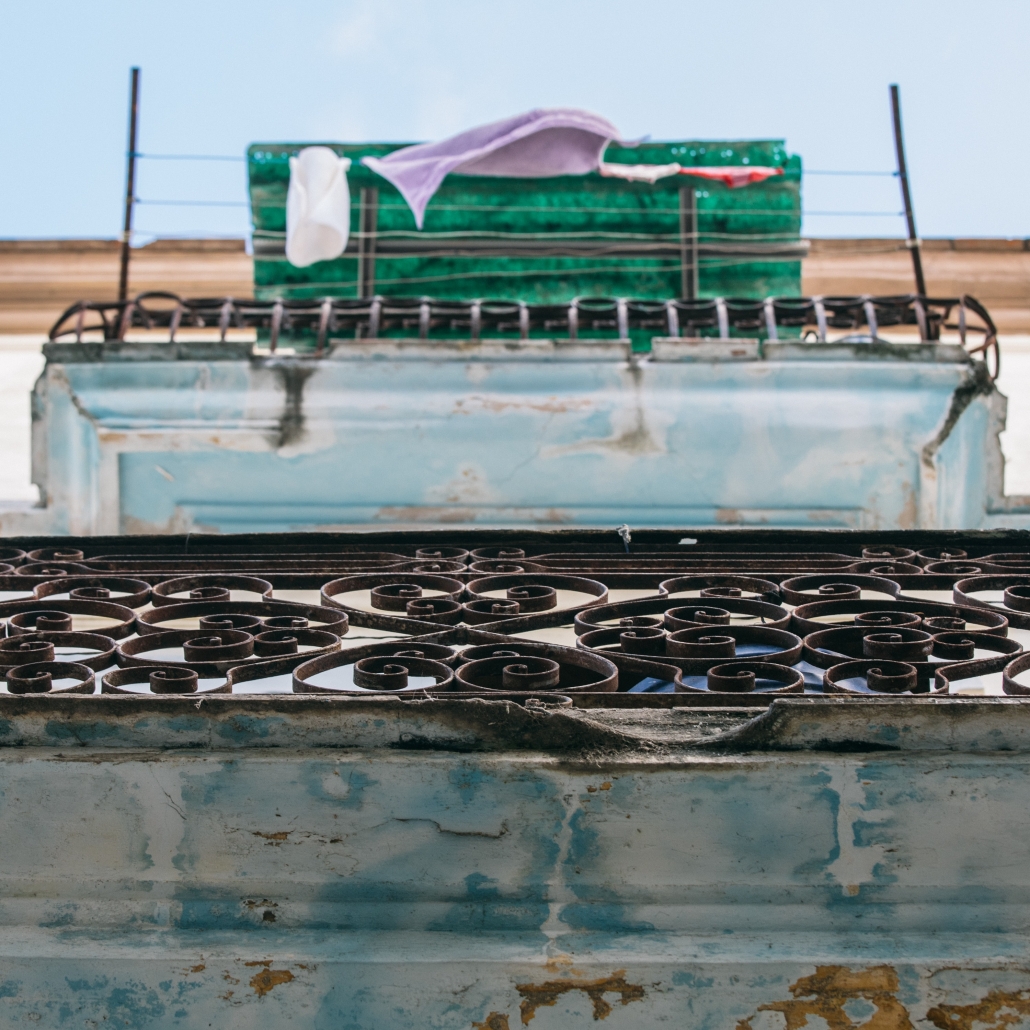 If you’re going to get wet in Cuba in October then why not fully immerse yourself in the water and go scuba diving; one of the island’s most popular activities. Incredible coral reefs surround Cuba that are perfect for exploring, and several professional diving centres will provide you with all the equipment and guidance you may need.

Whilst sheltering from the rain in a traditional Cuban cafe, why not try one of the country’s famous sandwiches, whose popularity originated in the mid-1800s as the tobacco industry in the country thrived and workers needed a simple but satisfying lunch. Whilst the key ingredients of a Cuban sandwich – ham, pork, swiss cheese, pickles and mustard – are simple, the taste is sensational and not to be missed during your visit

Stay in a Casa Particulares

An alternative to the big and unsettling empty hotels in Cuba in October is to stay in one of the country’s casas particulares; a private B&B-style form of accommodation where you rent out a room in a local’s house. This is one of the cheapest and most interesting ways to properly experience life in Cuba, and hosts are often very friendly and full of tips and advice about what to see and do during your stay.

Another great place to pass the time when the weather is bad in Cuba is the Hotel Nacional in Havana, which is possibly the country’s famous hotel. Whilst rates to stay overnight are very high, you can still visit the bar or restaurant if you are not a guest and marvel at the famous figures who have graced the rooms you are now sitting in. 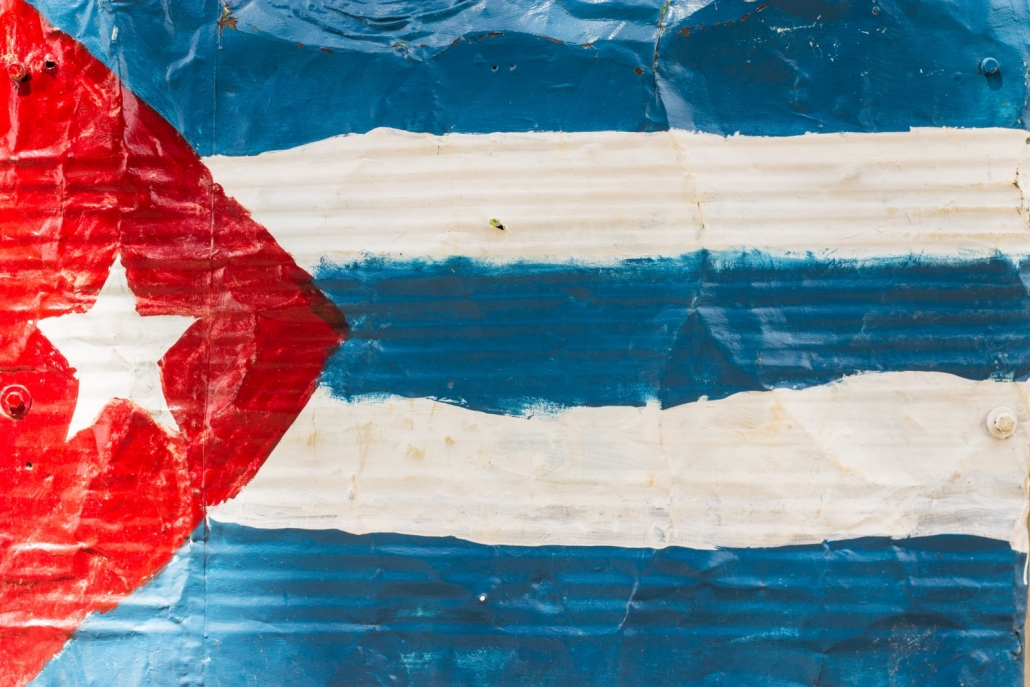 September and October are both the quietest months in Cuba in terms of tourism, and you can expect to find most cities almost empty of other travellers. Visiting Cuba in October, you will have the beaches almost entirely to yourself and find a lot of resorts practically empty, which is ideal if you are looking for a quiet and relaxing autumn break.

October is also a very cheap time to visit Cuba because of the lack of tourists, and flights, hotels and car rentals will all have dropped in price. 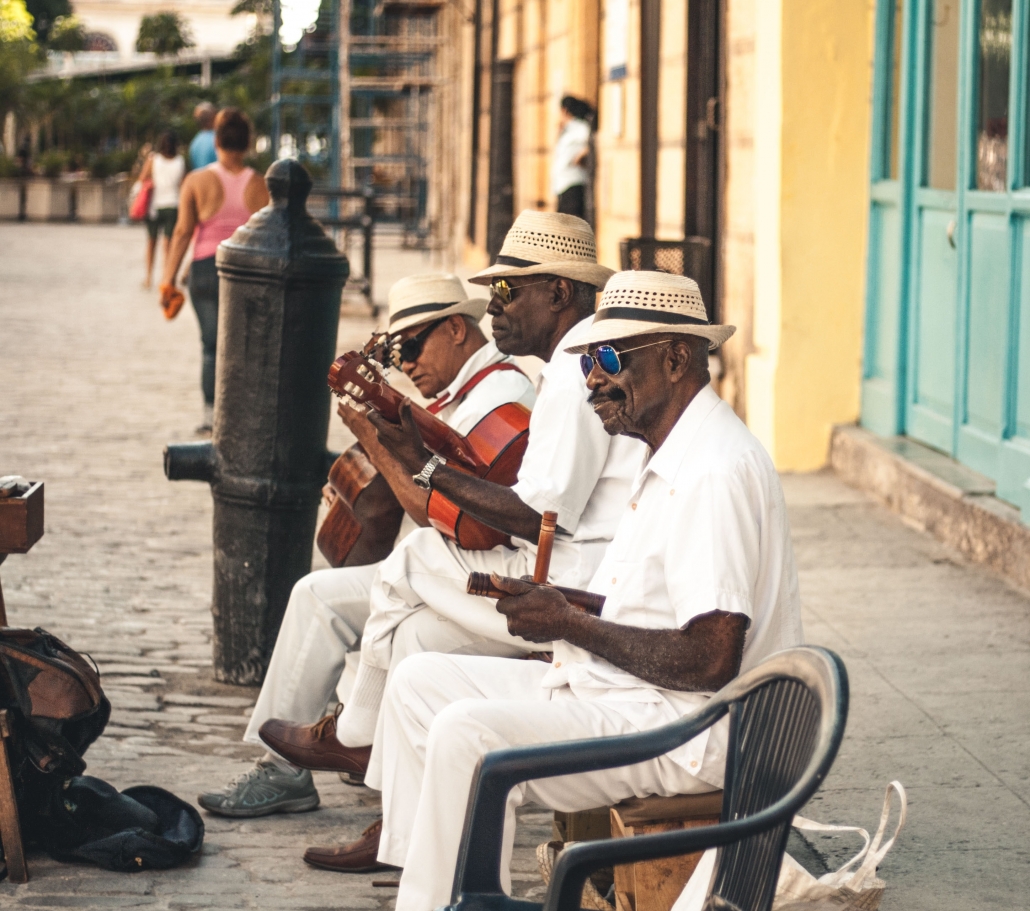 Ballet is an important Cuban art form, and every two years the International Ballet Festival of Havana is held in the country’s capital city. Cuba’s ballet companies are a very high standard, and the event has grown to take place across multiple venues in the city and is an internationally renowned event.

Local ballet dancers and companies from other countries attend the festival to perform throughout a week in October, providing a spectacular cultural treat for both ballet lovers and those new to the dance form.

Cuba is famous for its music, and there is no better city for music than Santiago de Cuba where the Matamoros Son Festival is held. The festival is dedicated to Miguel Matamoros who was born in Santiago and was a significant musician in the son genre of Cuban music that is performed by artists throughout the festival.

As well as musical performances, those attending the Matamoros Son Festival will also be able to attend talks, workshops and dance competitions, making it a fantastic opportunity to immerse yourself in Cuba’s music scene.

The majority of performances at this festival are in Spanish, but real fans of theatre will still enjoy this massive gathering of theatre groups from Cuba and the rest of the world. Attracting audiences from all over, the Havana Theatre Festival features performances in venues across the city aimed at both adults and children, and tickets are relatively cheap.

Is it hurricane season in Cuba in October?

The hurricane season in Cuba lasts from July to November, and the months when hurricanes are most likely to affect the island are September and October. Chances of this are very small, but it is a risk that you should consider when visiting the country.

Is it safe to travel in Cuba?

Cuba is generally considered quite a safe country to visit, and tourists are unlikely to come across any crime more serious than petty theft or tourist scams. Even if you are travelling alone you will be quite safe in Cuba, but every traveller should be prepared for the direct manner in which locals tend to approach visitors to try and sell things.

Does Cuba have internet?

There are internet and Wifi in Cuba, but it has quite limited access and tends to be expensive and unreliable. You may be able to use your photo to get 3G, and those staying in large resorts or hotels will have the best luck connecting to the internet. It is worth researching internet options before you travel if you think you are going to need reliable access during your trip.

Cuba is a wonderful place to travel to, offering a unique mix of cultures, people, architecture and scenery that ensure you won’t be bored during your stay. Despite the risk of bad weather, October is still a great time to come to Cuba and make the most of exploring its busy cities and visiting popular restaurants whilst the country isn’t full of tourists.

Cuba in November
Scroll to top