27 things to do
in Roatán

Roatán has quickly become one of Central America’s most popular destinations, and with that comes a host of things to do, and explore. The island is a veritable paradise, with enough diving and snorkelling opportunities to fill up your entire time there – if that’s really what you want.

If you don’t fancy being a complete water baby for your entire trip, however, there are plenty of other cultural, adventure, and wildlife experiences to keep you and your friends/family entertained. Read about some of our favourites below. 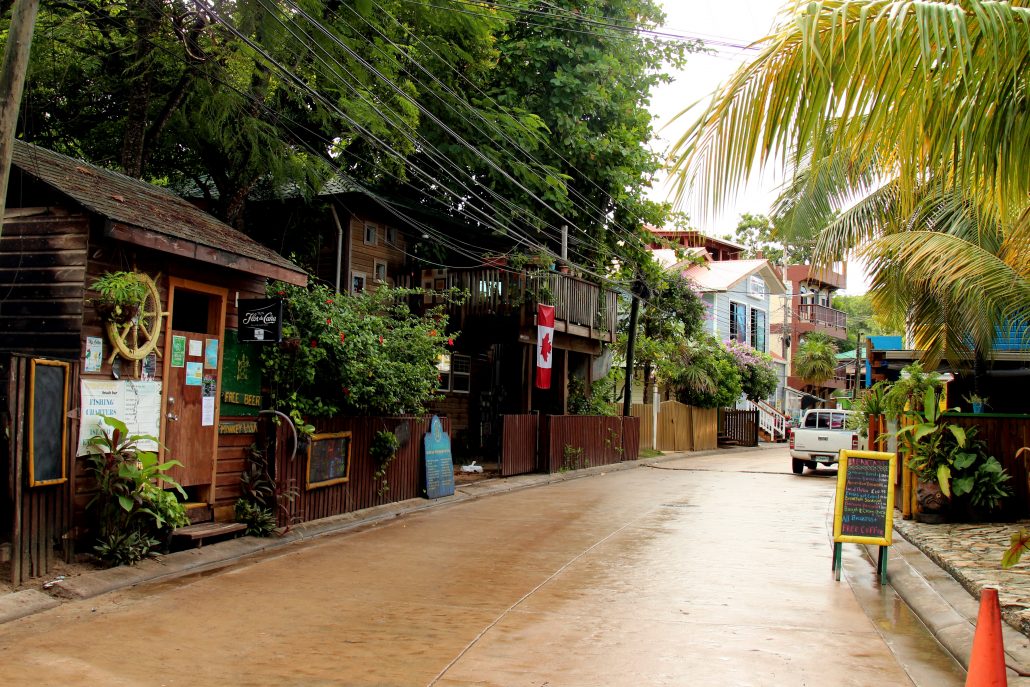 Not to be confused with the West End in London, West End in Roatán has a very distinct small-town island atmosphere to it. Known for some of the best shopping in the country as well as the country’s nightlife and plenty of diving shops. There is literally something happening at all times of the day: fishermen will kick the day off early in the morning – which is also the best time for water activities – before the restaurant scene begins to come to life following lunchtime. It’s one main road, that comes to life as the sun goes down, filling the streets with live music.

If a night of good food, fun games, and live entertainment sounds like your kind of thing, then you want to head to the “Island Fiesta” at Anthony’s Key Pavilion, every Wednesday night from 5 pm-10 pm. Here, you’ll find native Garifuna Dancers putting on a performance to music from a live band, native Honduran beats filling the atmosphere, and even a limbo contest.

Take a boat tour around the island

Sure, the landscape of Roatán is spectacular – but the real stars of the show can be found in the water, and around the coastline. So, what better way to experience both than with a tour around the island, in any direction, giving you the best view of the lush tropical forest and rolling hills? Most tours will also take you snorkelling at one of the offshore reefs, such as the Blue Channel or Spooky Channel if you request it.

Camp Bay is an amazing deserted beach on the far, eastern side of Roatán. It’s not easy to get to, and expect a few bumpy roads along the way, but if you can stomach the drive it’s well worth it – even just to get away from the crowds for a day.

One of the only villages found on the Cayos Cochinos islands, Chachahuate is slightly primitive, whose inhabitants come from Neuva Armenia, Jutiapa, and offers cheap lodging for backpackers who fancy staying in hammocks or hostel-like huts. Visiting here gives travellers the unique chance to try a traditional Roatán lunch, as well as experience the interestingly distinctive culture of the island.

The Roatán Museum manages to combine multiple ancient civilisations, from the Caribbean Indians to the African slaves, the notorious pirates, the English and Spanish conquests, and more, all in one impressive museum. Roatán itself is an amalgamation of influences from all of these events, and the museum is known as one of the best small museums in Central America thanks to its detailed history of the island.

The Mayan ruins found on Roatán date back as far as 1000 BC, and they can be explored if you head over to Copan. Despite being home to 20,000 Mayan people, Copan was never the largest of the Mayan cities, but it was a cultural centre, with the ruins including temples, plazas, ball courts, and sculptures. 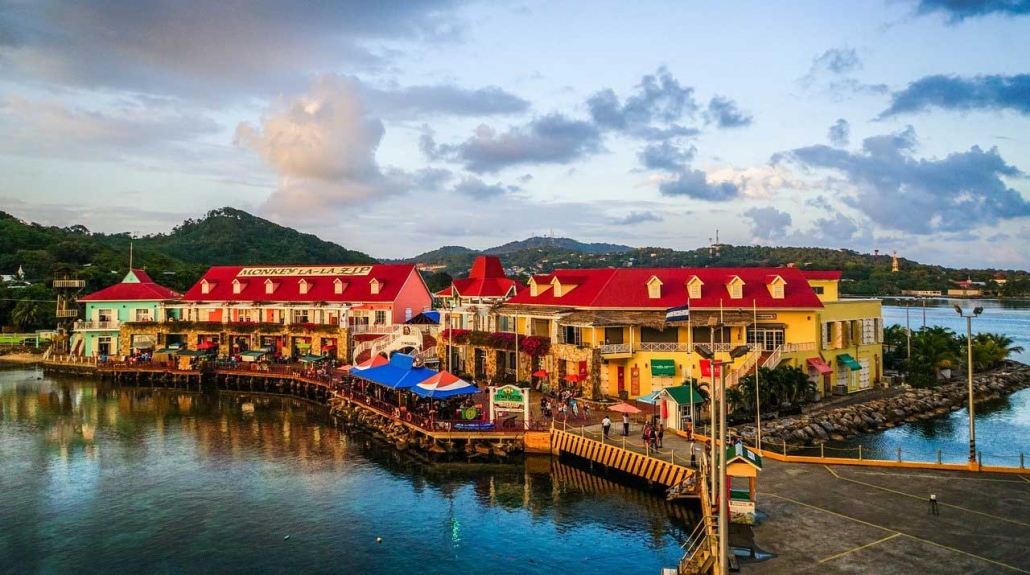 Honduras’ most famous dish is by far the Baleadas, a local dish made up of a thick tortilla folded in half, and then filled with beans, cheese, eggs, meat, etc. You won’t have to look far to find one; in the evenings, stalls pop up all over the streets selling them cheap, or you can head into Calelulus in the West End if you want to pay a little bit more, but get the best of the best.

Visit Captain Ed at the Hole in the Wall

The only way to visit the Hole in the Wall bar/restaurant is by a boat ride through some mangroves, and it’s well worth the treasure hunt to find this little secret bar. Authentically Caribbean, Captain Ed will have a million stories for you to keep you entertained for hours.

Tourism isn’t super strict in Roatán, mostly because there isn’t too much tourism – compared with, similar countries. That means, instead of your typical dolphin encounter where you swim in a tank and they kiss you while you get your picture taken, you actually get the chance to free swim with them. Find a cool guide, and head down to an enclosed area of the bay at Anthony’s Key Resort. Also, not many people will tell you this but the dolphins absolutely love to play; swim down and pluck a bit of seaweed, wave it around, and they’ll come right up to you and try to take it.

Horseback riding on the beach

Horseback riding along the beach is one of the best feelings in the world. Completely at one with nature letting the horse, for the most part, guide you – especially because they know most of their commands in the native language, so good luck actually getting it to go where you want. Race your horse down an unpopulated beach, splashing in the water, and exploring the thick, mysterious jungle.

Known locally as the “Venice Canals of the Caribbean”, exploring along the Mangrove tunnels is one of the most interesting tours in Roatán. You’ll be approached by a local tour guide, who will take you in his ‘dory’ – an old wooden canoe-type motorboat – before touring through the Caribbean fishing villages, with houses and shops built on stilts above the water.

One of Roatán’s more popular tourist destinations, there are plenty of reasons for this. Number one is that most people would never get the chance otherwise to see this many iguanas in one place. The farm has been around for nearly 20 years, and there is an estimated 3000 iguana roaming around the property. The iguana is a protected species on Roatán, which explains why there are so many being sheltered at the farm, and there is also a fish sanctuary located further down the marina.

Established in 1997, the research centre’s aim is to increase the presence and availability of researchers across Honduras and beyond in order to carry out research and understand whale sharks better. Become a volunteer while you’re staying in Roatán, and learn to dive, conduct underwater research, and help raise awareness of marine conservation.

Sloths are the nation’s favourite. Doesn’t really matter which nation, I can just guarantee they’re a favourite there. Which is great, because in Roatán you get the chance to spend the day hugging sloths. At the Daniel Johnson Monkey & Sloth Hangout, the sloths live and hang out in a big tree over the water, and are very friendly. But watch out for their claws, because they can be a little bit sharp.

If you like the idea of exploring unique and rare marine life, but you’re not so fond of getting wet, then head out onto the wide-open ocean in a glass-bottomed boat. All of the fun of seeing the fish swimming about, none of the hassle of getting saltwater out of your hair.

Sure, you can swim with dolphins, but have you ever fancied diving with sharks? Probably not, but it’s definitely worth the experience. Caribbean reef sharks are nothing like the scary great whites you see in films and on TV, who have been increasingly portrayed as dangerous man-eaters. No, here you can float on the water as the 9 foot long predators swim elegantly around you, along the southern shore of the island.

Zipline to the beach

For anyone who hates to just laze about for 14 days on a beach while on holiday, there are plenty of opportunities to try different things around Roatán – such as zip-lining your way down from the jungle trees straight onto the beach. Head to the Monkey Trail Canopy at Gumbalimba Park, and fly through the jungle on a 2 and a half-mile long zipline – which even goes across a lagoon.

Roatán is known for having some of the best diving locations in the Caribbean, and Honduras is home to the second-largest coral reef in the world. People come from all over the world specifically to dive here – it’s definitely not something you want to miss out on.

Snorkelling anywhere in Roatán is like scuba diving – completely unmissable. In fact, Roatán sits on the second largest barrier reef in the world, known as the Mesoamerican Reef, which is absolutely chockfull of fish, coral, and marine life.

Have a go on the sky swing

Any adrenaline seekers have to test out the sky swing in West Bay Beach. One of the most extreme activities the island has to offer, which sees you handing 50 metres above the Bay’s beach. The giant swing will suspend you by a pair of steel cables, and it’s up to you to pull the release cord, which will send you swaying at 50mph over the beach.

The Pico Bonito mountain is a massive 7,300ft above the park, full of cloud forests (a tropical forest characterised by a persistent, low-level cloud) and amazing rainforests. The jungles are full of quetzals, tapirs, and jaguars, as well as countless waterfalls that spout out from the mountain-sides. Tours of the forest include hiking to one of the countless swimming holes, spotting birds, insects, and fauna as you go.

The first underwater park in the world, Mayatlantis is a scenic underwater museum with replica structures from the Mayan civilisation. Located in the Big French Key, about a quarter of a mile from the main island of Roatán Honduras, there are also options to relax and lounge in hammocks, drink cocktails at swim-up huts, and paddleboard around the beach.

Roatán is a pretty flat island, so even though Pumpkin Hill is only 75 metres above sea level, you can still see for miles all around. It’s not an easy trip up to the top, with a dirt road that’s seen better days – and is near impossible to navigate during the rainy season, and for the most part, you have to go up on foot. Its definitely an off the beaten path activity, but the view at the top is an unparalleled 360-degree view of the island, including both the north and south shores. 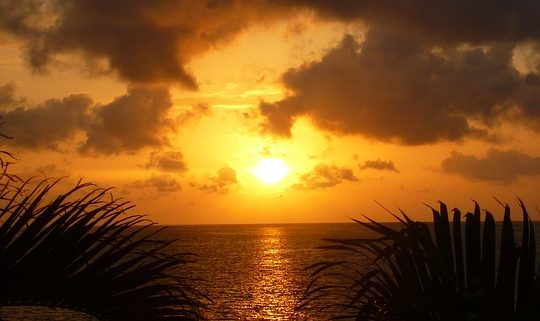 If you want a lot of people and a busy atmosphere, you head to West Bay’s beaches, if you want somewhere quieter and more relaxing, then you head to Half Moon Bay Beach, located at West End. Not only is it calmer, but the lack of people means you can head off snorkelling and swimming right off the shore, with no one about to scare off the wildlife, and no need for a boat to take you to the reef.

Catch the sunset at Lands End

Wander a little way out of the main strip of the West End, and you’ll find Lands End, a hotel bar and restaurant with a large oceanfront deck and pool. Plus, there are amazing views over the ocean, with steps leading through the rocky coast into the water. Roatán has some amazing sunsets, and this is one of the best places to spot them.

Test Out the hot springs

Everyone knows hot springs are the perfect way to relax, and the ones found in Roatán are no different. For the best results, head over after a day of horse riding and zip-lining, and you’ll find a natural pool in a mixture of cold and hot running water, as well as some artificial pools.

For such a small country, there’s a lot to do in Roatán. Don’t get bogged down in West End though – there’s so much to explore, and with our handy guide of the 27 best things you have to do while you’re there, there’s no excuse!

Where is Roatán?
Scroll to top