Brazil is a huge country in South America that is best known for the gigantic Amazon Rainforest that covers a significant proportion of its landscape. As well as tropical scenery inland, you’ve also got miles of beautiful coastline and a huge range of cities offering everything from colonial culture to modern music.

If you’re stuck somewhere cold in January then visiting Brazil on holiday is the perfect antidote. Temperatures are consistently hot and steamy, and whilst things can get very wet you’ll also get the chance to soak up a fair amount of sunshine and enjoy the vast variety of outdoor spaces across the country.

Reasons to visit Brazil in January 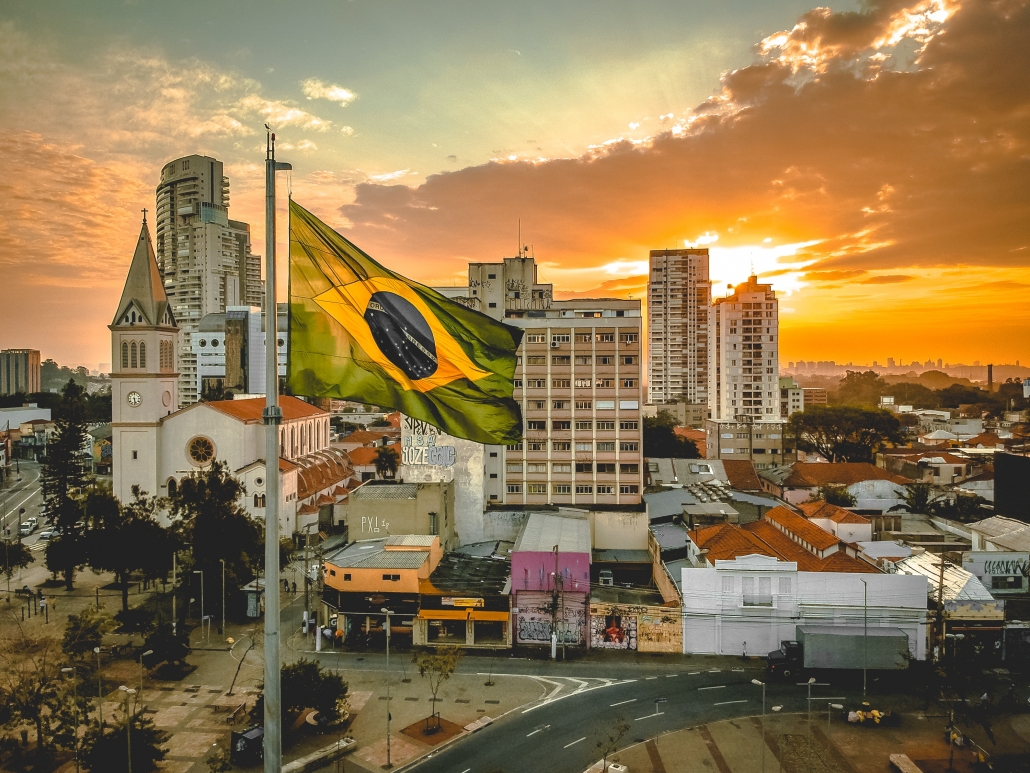 Weather in Brazil in January 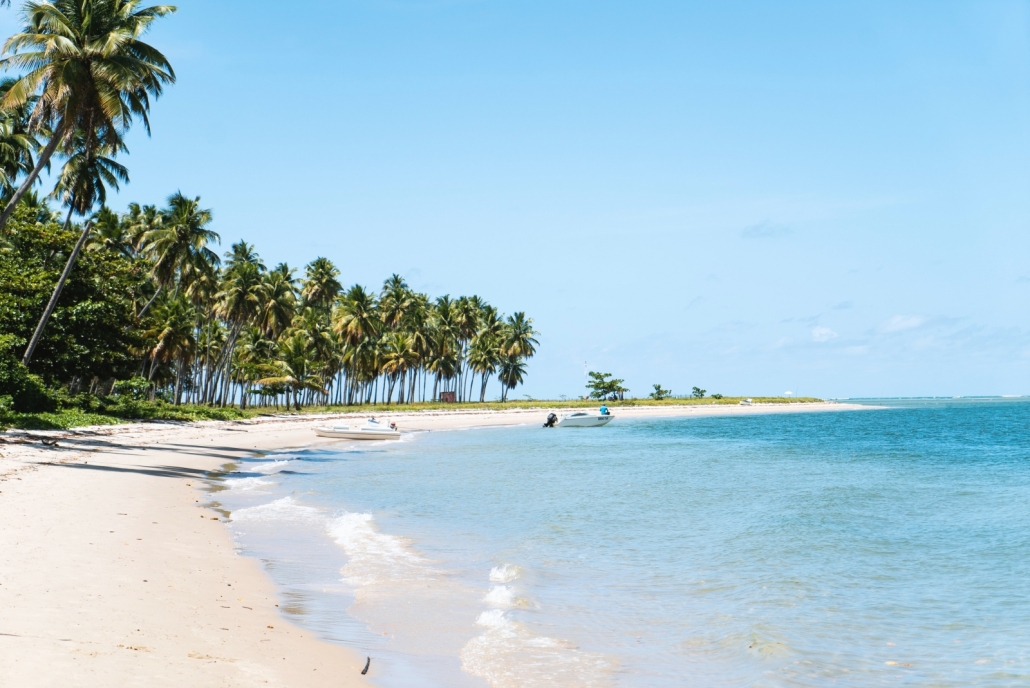 Brazil is a pretty large country, and so you can expect there to be a variety of weather across its different regions. In general though, the start of the summer season sees an increase in heat and humidity everywhere you go, as well as an increase in the chances of rain.

Average temperatures across Brazil in January tend to hover just under 30°C, with cities and the Amazon Rainforest in the south feeling every hotter with their tropical humidity. Temperatures don’t tend to drop below 20°C in the evenings which can make sleeping tricky if you’re not used to the heat, so it’s definitely worth checking that your accommodation will have air conditioning.

Average sea temperatures in Brazil in January are around 25°C-26°C, which is an ideal temperature for swimming, snorkelling and scuba diving. This is actually one of the best times of the year for swimming in the sea, as the water is consistently warm but offers a refreshing break from the humidity of the air.

January is the start of the rainy season in Brazil as well as the beginning of summer, which brings a considerable amount of rain to the country throughout the month. São Paolo has an average of 20 days of rain, Rio has 13 and Belo Horizonte has 17. Showers tend to appear in the afternoon and can last for several hours, so make sure you’ve got indoor activities planned during your trip!

Because of the wey and muggy weather in Brazil in January, there isn’t that much bright sunshine even though the temperature is so high. You can expect an average of 5 hours of sunshine each day, with the sun rising just after 6 am and setting just after 6 pm.

Where to go in Brazil in January 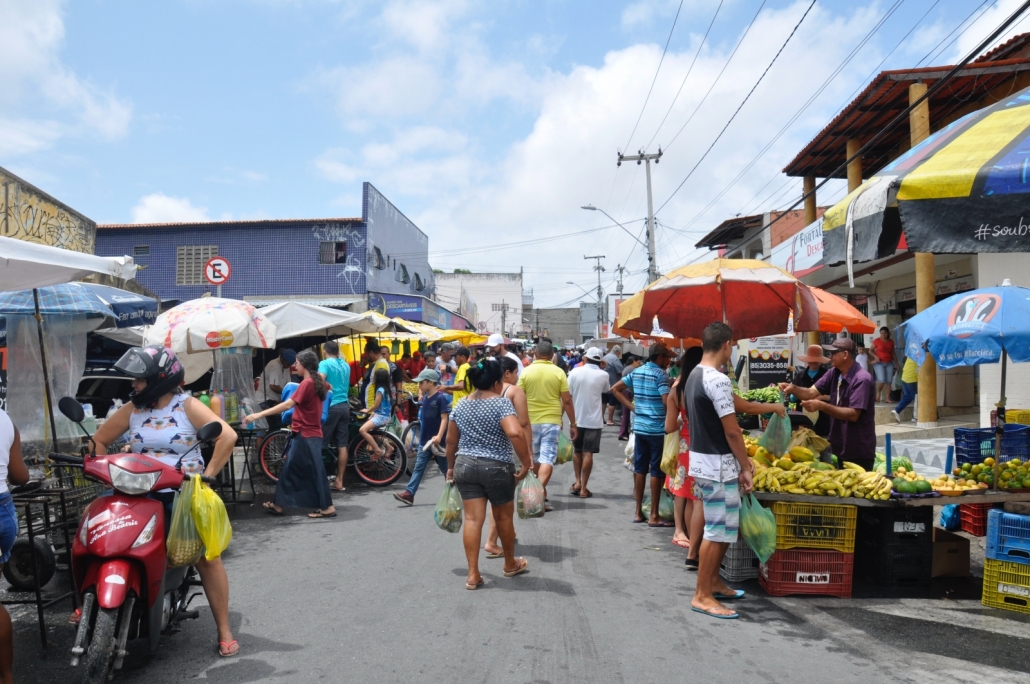 Fortaleza is an ideal Brazillian destination for January, with plenty to do both indoors and outdoors. It’s most famous for the brilliant selection of beaches found along the city’s coast, including Mucuripe, Meireles, and Iracema, which can be enjoyed during the sunny January mornings as a relaxing start to the day.

If it does start to rain in the afternoons in Fortaleza then you can take shelter in one of the charming, colonial buildings along the beachfront, or venture further into the city to enjoy some shopping. The nightlife in Fortaleza is fantastic if you’re looking for something to do in the evening, but there is also a lively comedy and theatre scene if that’s more your style.

If you’re looking to enjoy the Afro-Brazillian culture in Brazil during your holiday then you should head to the city of Salvador, which was the original colonial capital of the country. Here you’ll find another range of brilliant beaches alongside colourful colonial buildings, best enjoyed during the hot and sunny periods that Brazil enjoys in January.

Salvador is another great place to visit when the weather is wet, as it’s one of the best parts of the country for arts and culture. As well as museums and galleries, the music scene in the city is spectacular, and you’ll find numerous live performances taking place every single night you visit.

Things to do in Brazil in January 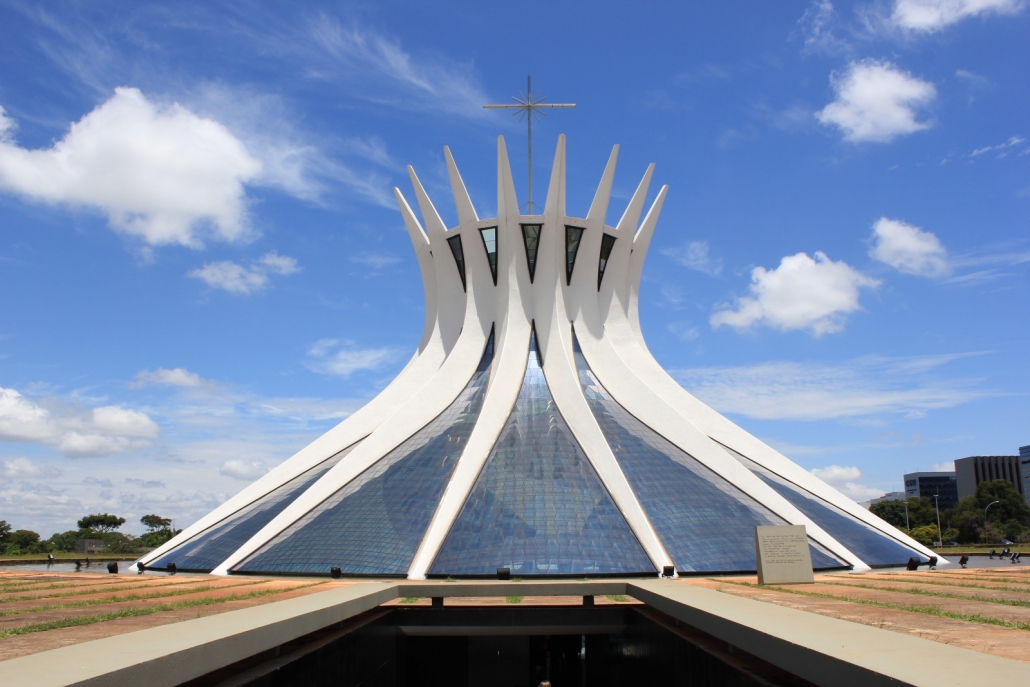 Canoe Through the Forest

The wet weather in January can be a nuisance for many visitors, as it causes flooding through Brazil’s rainforest which makes many roads impassable. However, it does allow the unusual activity of being able to canoe through the rainforest instead, which is certainly not an experience to be missed if you’re in a flooded area.

Visit the Cathedral of Brasília

There’s plenty of brilliant and interesting architecture to be found in Brazil, but a highlight has got to be the incredible cathedral in the country’s capital city. Formed of 16 concrete pillars and with a spectacular glass ceiling, the building is a piece of art as well as a place of worship and is truly unlike any other catholic cathedral you’ll have seen before.

Panara is the biggest city in the south of Brazil, home to one of the biggest and most beautiful botanical gardens in Europe. The gardens have been built inside a native forest and include lights and sculptures as well as a myriad of different plants and flowers. It’s the perfect place for a romantic walk, or to enjoy a picnic on a warm evening.

January is the start of the summer season in Brazil, and so it is also the start of the busiest tourist season in the country. It can also be very wet during the month however, which does deter some people. Still, expect prices for flights and accommodation to be on the rise.

It’s worth noting that a lot of the inhabitants of Brazil travel to the country’s coast in January, as temperatures inland start to rise along with the humidity The coast offers cooler temperatures and much more of a breeze, so be prepared for crowds if you’re planning on spending time at the beach. 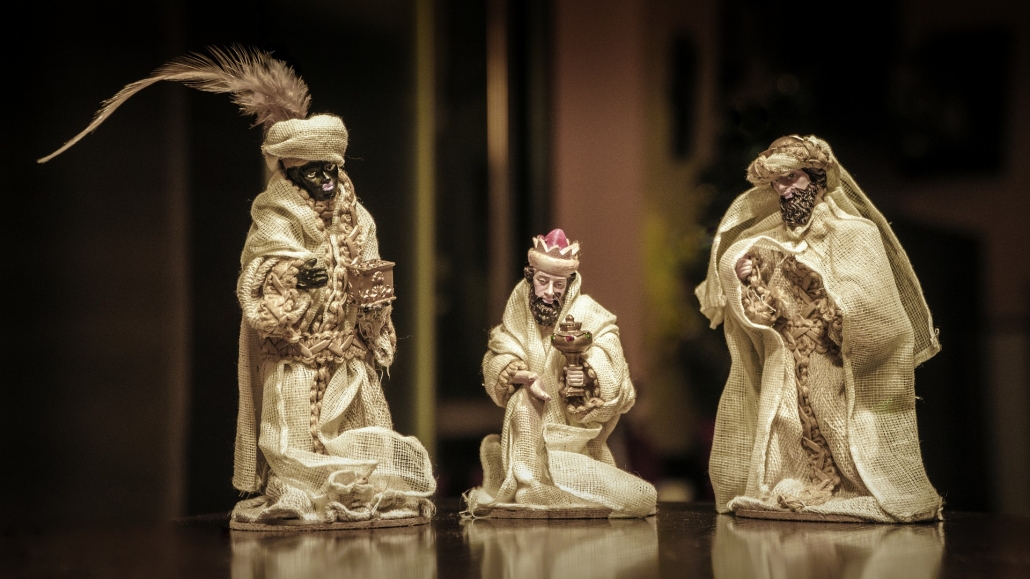 As in many Spanish and Portuguese-speaking countries, the Catholic celebration of Epiphany, or Three Kings day, takes place on the 6th of January every year. The biggest celebration of the festival happens in Salvador, where there is a big parade through the city streets as well as traditional gatherings and gift-giving.

Washing the Steps of Bonfim Church

On the second Thursday of the month after January the 6th, another Christain event takes place, this time with the washing of the steps of Bonfim Church in lower Salvador. There is a colourful procession across the city of all of the people who come to wash the steps, and the whole event has its roots in the cultural history of the city and the different religions that were practised there.

The 20th of January is dedicated to Saint Sebastian, the Christian saint who is also considered the patron saint of the city of Rio de Janeiro. There is a parade held in the city on this day in honour of the saint, as well as special church services and celebrations. 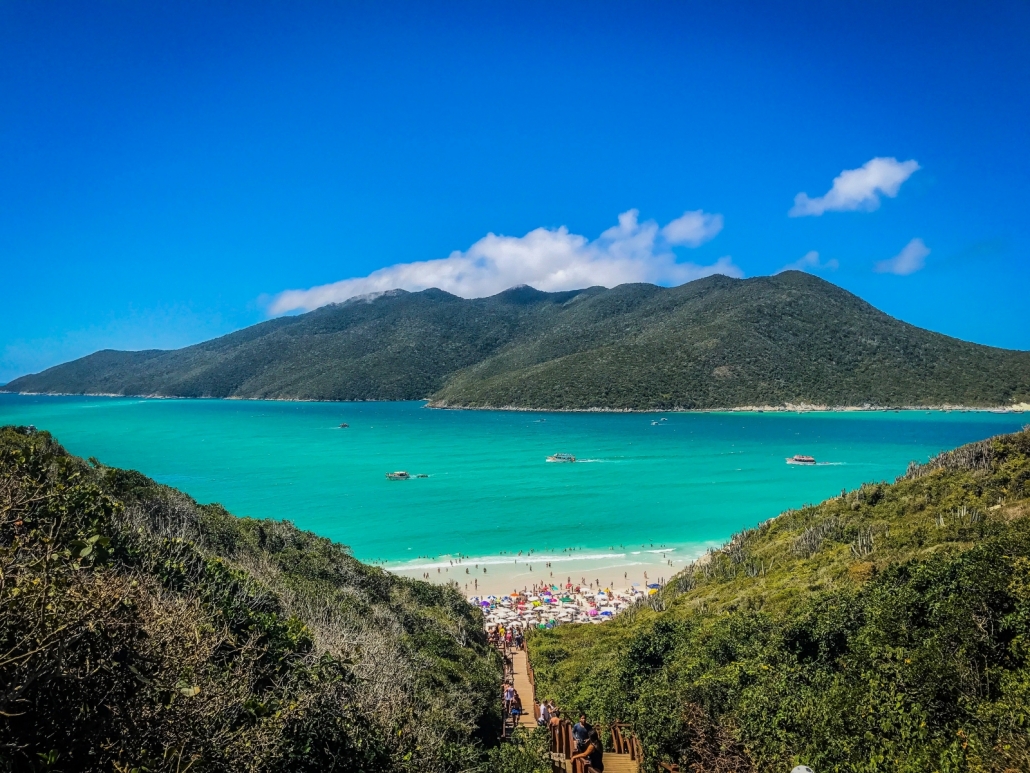 What season is January in Brazil?

January is the start of the summer season in Brazil, which is one of the reasons why this is such a popular time of the year to come to the country. Just because it is summer, however, does not mean that it will be hot and dry however – Brazil still sees a fair bit of rain at the start of the year.

What is the coldest month in Brazil?

Don’t be put off by the chance of rain in Brazil in January – it’s a brilliant country that offers lots of sunshine and heat to visitors amongst the showers, and has plenty to do indoors anyway. As long as you pack your sunscreen and insect repellent, you’ll be ready to face the humidity head on and get out there to enjoy the beaches, forests and cities that this country is so famous for.

Want to find out more about the top destinations in America to visit in January? Read our guides to Nicaragua and Mexico or take a look at our rundown of Where to Go in January. 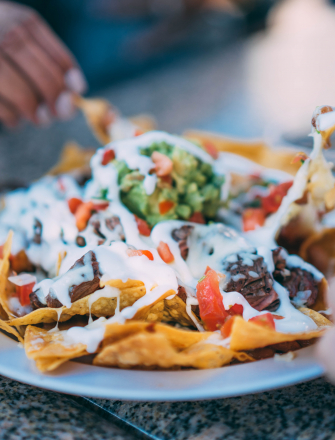 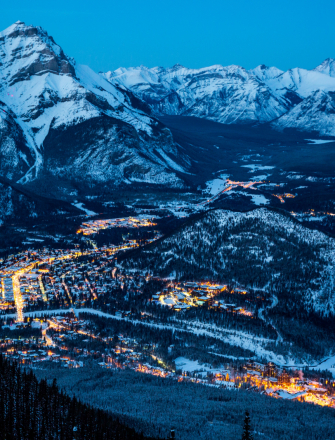 Nicaragua in January
Scroll to top